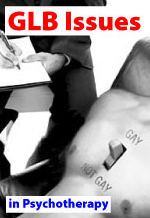 This new online CE course is based on a task force report of the American Psychological Association regarding psychotherapy with gay, lesbian, and bisexual individuals. The American Psychological Association Task Force on Appropriate Therapeutic Responses to Sexual Orientation conducted a systematic review of the peer-reviewed journal literature on sexual orientation change efforts (SOCE) and concluded that efforts to change sexual orientation are unlikely to be successful and involve some risk of harm, contrary to the claims of SOCE practitioners and advocates. Even though the research and clinical literature demonstrate that same-sex sexual and romantic attractions, feelings, and behaviors are normal and positive variations of human sexuality, regardless of sexual orientation identity, the task force concluded that the population that undergoes SOCE tends to have strongly conservative religious views that lead them to seek to change their sexual orientation. Thus, the appropriate application of affirmative therapeutic interventions for those who seek SOCE involves therapist acceptance, support, and understanding of clients and the facilitation of clients’ active coping, social support, and identity exploration and development, without imposing a specific sexual orientation identity outcome.