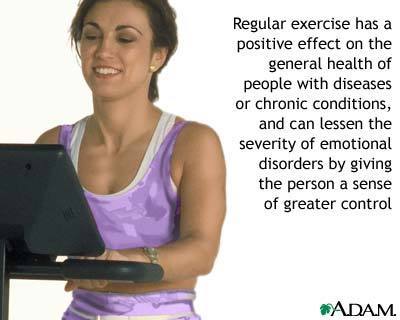 Exercise is an effective, but potentially underused, treatment option for mental illness, experts say. In a symposium presented here at the Canadian Psychiatric Association (CPA) 61st Annual Conference, Christopher Willer, MD, a senior psychiatry resident at the University of Toronto, Ontario, Canada, made the case for exercise as an adjunctive therapy. Emerging research, he said, strongly suggests that exercise can improve patients’ physical and mental health and may help offset some of the metabolic effects associated with older antidepressants and newer atypical antipsychotics. “It’s not too soon to talk to patients about exercise as another treatment option, especially if they are asking about it or if they have a history of sport being important in their lives. “There’s often a time lag between the time research comes out and when treatment guidelines are published. Based on the quality of the research that has been published [on exercise and mental illness] in the last 5 years, I think it would be irresponsible to wait,” Dr. Willer told Medscape Medical News. In his presentation, Dr. Willer reviewed the existing literature for aerobic exercise as a treatment for mental illness, some of which suggests it can be as effective as pharmacotherapy and/or talk therapies. However, potential mental health benefits aside, Dr. Willer noted that the physical benefits of exercise are clear and include reducing cardiovascular risk factors that are often associated with mental illness and the medications used to treat psychiatric disorders. “Exercise mitigates certain illnesses; it protects against obesity, which certainly is a big problem with much of our patient population; and it has been shown to help with cognition and affective problems in well people. “As psychiatrists, we have to remember that we’re not just concerned with our patients’ psychiatric symptoms but also their physical health. It is important that we promote an active lifestyle to our clients as part and parcel of good psychiatric treatment,” he said. Early research examining exercise and depressive symptoms has been relatively simple, relying on case reports or short-term intervention studies. However, said Dr. Willer, in the past 5 years it has become more sophisticated. “We’ve come a long way, and now there are randomized trials that are attempting to compare exercise to a sham version of exercise that include larger numbers of patients, so the studies are higher quality,” he said. Most of the evidence to date supports the use of aerobic exercise in unipolar depression, he added. However, a Cochrane review published in 2010 and reported by Medscape Medical News at that time showed that regular physical exercise in individuals with schizophrenia and schizophrenia-like illnesses is feasible and may help improve the mental and physical well-being of these patients. Nevertheless, although the overall results were positive, the review included only 3 small studies, prompting the authors to point out that larger randomized trials are needed “before any definitive conclusions can be drawn.” Dr. Willer also noted that physical activity has been shown to have antianxiolytic properties. In patients with anxiety, sometimes there is a concern that the somatic expression of exercise — elevated heart rate, sweating, and heavy breathing — may invoke a panic response, but the literature does not bear this out, said Dr. Willer. “There are studies that suggest that in the moment, anxiety can be moderated by physical activity, and there are also studies showing 20 minutes of exercise a day for 10 weeks can modify on trait anxiety,” he added. Dr. Willer pointed out that only about 30% of North Americans get the recommended amount of 150 minutes of exercise per week, and that the therapeutic dose for the treatment of mental illness is unclear. However, he noted, as the research becomes more refined, this will be elucidated. In the meantime, he said, encouraging psychiatric patients to become more physically active is a worthwhile endeavor. “It is not expensive, and it can be independent of the healthcare system. It doesn’t require [the psychiatrist] to be involved, other than to mentor patients and to check in with them,” he said. Asked by Medscape Medical News to comment on Dr. Willer’s presentation and assertion that psychiatrists should consider exercise as a viable treatment option, Saul Marks, MD, a practicing sports psychiatrist at North York General Hospital in Toronto, said it is a routine part of his practice. “Exercise confers a definite benefit. I have a patient myself who was able to come off antidepressant medication by taking up running, and she is doing extremely well now. There is a growing body of literature that psychiatric patients are at particular risk of metabolic syndrome, especially if they are taking atypical antipsychotics, suggesting psychiatrists need to promote exercise as a treatment,” said Dr. Marks. Dr. Marks added that he routinely talks to his patients about the importance of being physically active every day. “Even if they do something as simple as walking for 45 minutes a day, that will keep them physically fit and also help their mental health,” he said.
Show original